In Our Own Backyard: Reflections on the
Waldo Canyon Fire (DVD)

Click cover to look inside
On June 26, 2012, the Waldo Canyon fire destroyed 347 homes, destroyed the historic Flying W Ranch, and took two lives. At the time, it was the most destructive fire in Colorado history. The fire also revealed the courage of citizens, firefighters, and police officers; the generosity of strangers; and the strong sense of community in El Paso County and the state of Colorado. This documentary features interviews with 26 people directly impacted by the fire by evacuation or losing their home, and firefighters and police officers involved in managing the blaze. After the filming of this documentary, the Black Forest fire claimed 511 homes and two lives during June 2013. DVD-R Widescreen format video, NTSC, color, approx. 101 min., not rated. ISBN 978-1-56735-314-3 $8.95 DVD. Buy DVD from Kunaki.com

Phantoms in the Archives:
Unlocking a Manitou Springs Mystery (DVD) 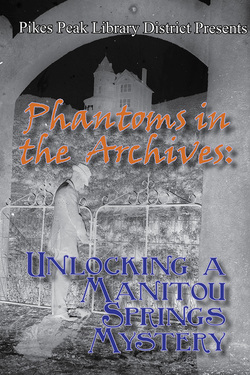 Click cover to look inside
Photographs of a mysterious red brick mansion in the Pikes Peak Library District archives intrigue Katie and Sandy who investigate the Manitou Springs, Colorado, home known as Redstone Castle. They learn that stage actress Alice Crawford Snow resided in the “haunted house” during the early 1900s where she was once found in a “blazing bed” after shooting herself in the knee. Alice and her mother, Jeanette, were Spiritualists who claimed to enjoy “nightly conversations with the dead.” Join Katie and Sandy on their investigation to unlock the Manitou Springs mystery of Redstone Castle. DVD-R Standard format video, NTSC, color, approx. 69 min., not rated ISBN 978-1-56735-328-0 $8.95 DVD. Buy DVD from Kunaki.com

Click cover to look inside
﻿﻿﻿﻿Commemorating the 100th anniversary of the alleged deaths of Willis and Sallie Skinner, Pikes Peak Library District’s Kaitlin Hoke and Katie Rudolph involve you in solving the mystery of a photo postcard labeled, “Frozen to Death on Pike’s Peak Aug. 21, 1911.” Was someone really frozen on the Peak during the middle of the summer? Was the postcard real, or was it a hoax? Kaitlin and Katie analyze the evidence as their investigation takes you through their research to solve the case. Produced, filmed and edited by Jamey Hastings. DVD-R Widescreen format, NTSC, color, approx. 30 min. + Bonus Content, not rated. ISBN 978-1-56735-289-4 $8.95 DVD. Buy DVD from Kunaki.com

Tracing Tesla: The Search for His Lost Laboratory (DVD) 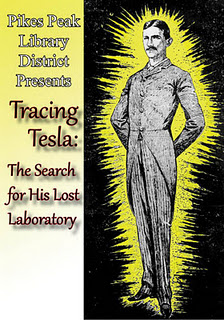 Click cover to look inside
On May 17, 1899, a brief but electrifying chapter in Colorado history began when Nikola Tesla arrived in Colorado Springs, in the shadow of Pikes Peak, with the goal of taming nature’s wild energy. Although the visionary scientist’s time in the city was short, less than one year, the insights visited upon him during grand electrical experiments in his barn-like laboratory on Knob Hill profoundly affected the course of his life and ideas. Although there has been speculation, the exact location of Tesla’s lab has remained a puzzle. With help from Pikes Peak Library District Special Collections librarian Dennis Daily, history investigator Kevin Hudgens searches for the location this mysterious lab. DVD-R Widescreen format, NTSC, color, approx. 43 min. + Bonus Content, not rated. ISBN 978-1-56735-292-4 $8.95 DVD. Buy DVD from Kunaki.com

Produced, filmed and edited by Jamey Hastings. Winner of a 2011 Bronze Telly Award in the Documentary category honoring outstanding local, regional, and cable TV commercials and programs, the finest video and film productions, and web commercials, videos and films.